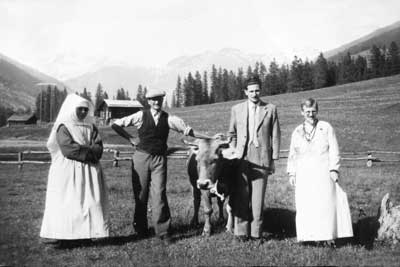 In our days we estimate worldwide about 1000 Werlen. 70% live in Switzerland, 20% in Argentina and 10% in Italy, France, Germany, England, USA and other countries. In the medieval time Werlen lines are documented in:
- Switzerland*
- Germany (von Werlen)
- Holland (van Werlen).
The German and Dutch lines are spend.

In Switzerland the Werlen came from German speaking areas of the canton Wallis (in French canton Valais):
- Obergoms
- Loetschental
- Schattenberge

There is no evidence for parental dependencies between this lines. But they share the same culture and the same past.

On this page read history of the Obergoms Werlen. Yet only available in German, information about the Loetschental line and the Schattenberge line.

The History of the Obergoms-Line

Between the years 800-1300 a little Germanic community colonized the highest valleys of the alps. This community was extremely adapted to the alpine-life in areas too inhospitable for the Roman-Celtic inhabitants of the lower valleys. More information about this alpine settlers, today known as Walliser and Walser, you find here.

We can assume, that the ancestors of the Werlen were among the alpine settlers which colonized about the year 1000 the Obergoms (ground-altitude 4000-5000 feet, surrounding mountains 10'000-14000 feet). They received the lands from the prince-bishop of Valais and they obtained juridical and economic independence, as they managed to make use of colon's status.
___________________________

The forefather of the Obergoms-Line was very probably Peter Werlen, born about 1340. Complete genealogical data are available since parish-register recorded all relevant events (since 1630).

Up to the middle of the 20th century the Obergoms-Werlen generally remained in their homeland and lived there as free, brave cattle breeder and alpine farmer - cultivating their own land, dedicated to collect in the short-summertime enough hay to feed in the long, dark wintertime their pride: The milk-cows!

They were also very proud of their homes, the sun-darkened timber houses - and last but not least, their children. Among them an extraordinary large number of sons and daughters, that served the church. E.g. in the 1690ties from a single family 3 priests. In the 1940ties 5 brothers were at the same time Swiss Guards. Remarkable also the latest Werlen-contribution: Abbot Martin. He has been nominated in 2001 at the age of 32. He is worldwide the youngest Roman Catholic Excellency since the 18th century.

The Werlen’s had also the privilege to live in the most beautiful landscape of the world - that is the opinion of every Werlen. If you doubt it, come and see! Furthermore they were very lucky, that their homes were never victims of real misery or devastating war-events. In the time-range of Werlen Family History their native country Obergoms saw a war in 1419 and in 1799. But no Werlen was hurt and the only damage was in 1799 when French soldiers tried to cool down a stone-oven with cold water!
___________________________

From 1340 to about the 1950ties the Werlen continued “to do the tings as the forefathers did”. They preserved their culture and traditions, e.g. their very archaic dialect, similar to medieval German and rather different from other Swiss-dialects. Only a small minority left the valleys where the ancestors lived.

Then within one generation , all changed: The large majority of the Werlen-community is no longer living in the homeland of their ancestors. The majority of them is working at a desk …. from the cow to the mouse!

But wherever they live and whatever they do, they still have a strong emotional connection to the homeland of their ancestors – and they will not forget their roots.