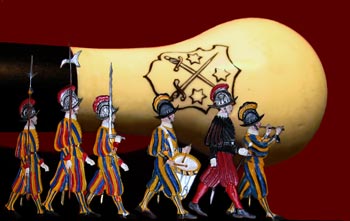 The old tin figures in the picture above show Swiss Guards. From the left:

Since 1506 the Vatican's Swiss Guard protect the Holy Father and ensure security
at the Apostolic Palace.

Soon on this screen: A short history of the Swissguard and their origin.